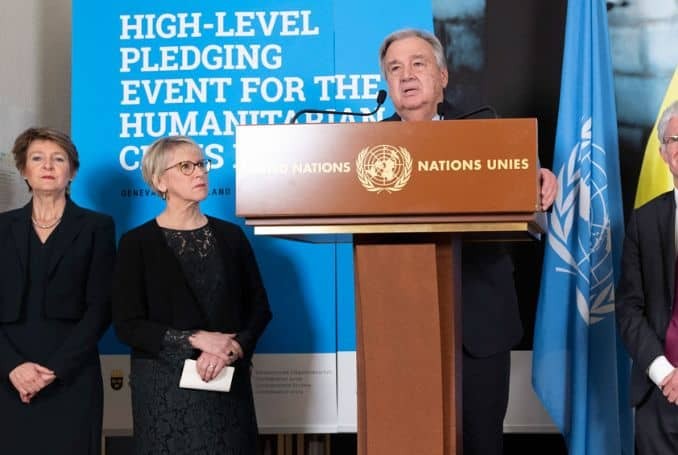 This year’s observance falls at a time when our world faces many global challenges, from climate change, inequality, armed conflict, humanitarian emergencies to the weakening of commitment to multilateralism.

Gender equality and women’s rights are fundamental to addressing each of these challenges.  We can only re-establish trust and rebuild global solidarity by challenging historic injustices and promoting the rights and dignity of all.  We can only achieve sustainable development and peace by drawing on all our assets and capacities.

In recent decades, we have seen remarkable progress on women’s rights and leadership.  But these gains are far from consistent, and they have sparked a backlash from an entrenched patriarchy.

Gender equality is fundamentally a question of power.  We live still in a male-dominated world.  Our male-dominated culture has ignored, silenced and oppressed women for centuries — even millennia.

A recently-published book drew my attention to the fact that Homer’s Odyssey, one of the founding works of Western literature that recounts events that happened more than 3,000 years ago, opens with an account of Telemachus, the son of Odysseus and Penelope, telling his mother to stop talking and go back to weaving at her loom.

We can draw a straight line between that story and the silencing and harassment of women today.

Women’s political representation in parliaments around the world stands at less than 25 per cent.  At the highest levels that drops to 9 per cent.  And the Global Media Monitoring Project found that worldwide, just one quarter of the subjects of news stories are women, and most often as victims rather than leaders.

Despite women’s achievements and successes, their voices are still routinely overlooked, and their opinions ignored.  We are all paying the price for inequality and oppression.

Increasing the number of women decision-makers is essential.  At the United Nations, I have made this a personal and urgent priority.

We now have gender parity among those who lead our teams around the world.  Six months ago, we reached parity in the Senior Management Group, where we have today more women than men — 26 women and 16 men to be precise — placing us well ahead of schedule to achieve the goal of parity in all senior leadership by 2021.

One sure sign that this is an issue of power lies in the fact that those targeted for sexual harassment are overwhelmingly women.  I have taken steps to address this extremely damaging behaviour at the United Nations, by focusing on prevention, by establishing a new team — made up entirely of women — dedicated to investigating allegations rapidly, supporting victims through their trauma and ensuring accountability for perpetrators.

Women still face major obstacles in accessing and exercising power.  As the World Bank found, just six economies give women and men equal legal rights in areas that affect their work.  At present trends, it will take two centuries to close the gap in economic empowerment — a gap that is widening, not lessening, by the day.

Everywhere around the world we see two parallel trends.  While global movements and increased awareness are contributing to greater acknowledgement of the need for gender equality, this is happening simultaneously with a reinvigorated pushback on women’s rights.

This takes multiple forms — including increased violence against women human rights defenders and women running for political office, to online targeting and harassment of women who speak out.  Such attacks aim to reinforce women’s traditional roles in society and punish those who challenge it.

In some countries, homicide rates overall are decreasing — but killings of women are rising.  In others, we see a rollback of legal protection against domestic violence or female genital mutilation.

Women’s participation makes peace agreements more durable, but we still struggle to make sure women are included in negotiating teams.  Even Governments that are vocal supporters of this agenda fail to back their words with action.

Nationalist, populist and austerity agendas add to inequality with policies that curtail women’s rights and cut social services.  We must not give ground that has been won over decades.  We must push for wholesale, rapid and radical change.

This year’s theme of International Women’s Day, “Think Equal, Build Smart, Innovate for Change”, addresses infrastructure and systems that have been constructed largely in line with a male-defined culture, and celebrates the creativity of women inventors and innovators through history.

We need to find ways of reimagining and rebuilding our world so that it works for everyone.

Too often, roads and transportation are planned with men’s needs in mind — carrying people from the periphery to the urban centre, rather than between various sites in the periphery, including schools and services.  Street lighting and bus timetables are not gender-neutral.

Innovations like mobile payments and e-learning platforms can deliver services directly to women, especially those who are isolated and hard to reach.

Innovation and technology reflect the people who make them.  But women are seriously underrepresented in the fields of science, technology, engineering, mathematics and design.

Last month, in Ethiopia, I spent some time with the African Girls Can Code group.  Programmes like this not only develop skills; they challenge the stereotypes that limit girls’ ambitions and dreams.

Investing in women and respecting their human rights is the surest way to lift communities, companies and countries, and to achieve the 2030 Agenda for Sustainable Development.

The longer we put off gender equality, the more we lose.

Next year marks the twenty-fifth anniversary of the Beijing Platform for Action, and 20 years since the adoption of the Security Council’s landmark resolution 1325 (2000) on women, peace and security.

Our discussions today and at major events in the months ahead can lead the way to greater commitment and action.

On this International Women’s Day, I call for a new vision of equality and opportunity so that half the world’s population can contribute to all the world’s success.